Things are getting a little frightening around Battle Arts Professional Wrestling. Both Heavyweight Champion Randy Reign and Light Heavyweight Champion Dustin QuickSilver have aligned themselves with Battle Arts Academy landlord, Pasquale di Papa. With J.P. Morgado in tow, this fearsome foursome has taken power over Battle Arts. Who can stop them? Perhaps former Champion "The Mercenary" Mike Dorosti and his manager Ray Bernardo can find other asailants to help even the odds. Meanwhile, another terrifying trio, The Compound, is still tormenting whomever they please. Last month, referee turned wrestler Nick Wildey became Buck Gunderson's target, and the two had a one-on-one match with a referee of Gunderson's choosing...The Compound's own, Smiles. This time around, it's going to be a six man affair as The entire Compound, Gunderson, Smiles & the monstrous Karou, meet Wildey and partners of his choosing, The O.G.'s.

Original BATTLARTS founder Yuki Ishikawa returned to in ring action last month, teaming with Hornet to defeat Freedom Wallace & Bradford Montague. If there is anyone to be afraid of in Battle Arts, it's Ishikawa. How does this purveyor of tradition, passion and emotion feel about the recent developments within the walls of Battle Arts Academy? In other action, two men looking to make an impact square off in singles competition, when Aussie Sam Osborne meets the hard-hitting James Runyan. 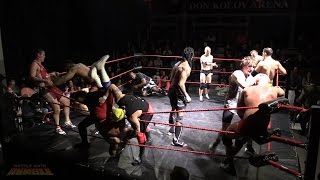